It has come to our attention that some companies within the UK are selling water detection cable imported from China where the cable is not a solid mass, but can be untwisted as shown in the following picture. A loose structure such as this can lead to potential false or intermittent water detected alarms or alarms caused by someone moving the cable. The following picture shows a sample of the Chinese cables that have been hand twisted to open up their structure. Looking at the picture, you can see the silver sensor wires extending away from the body of the cable and the open latticework of wires. If the wires are not bonded to each other, water can accumulate within the small spaces within the cable leading to an over sensitive detection cable. This will create false or permanent alarms due to the sensing wires unravelling and touching each other during installation or maintenance. Moisture from damp areas such as plant rooms etc. or air conditioning units can accumulate within the cable structure again causing false water detected alarms. 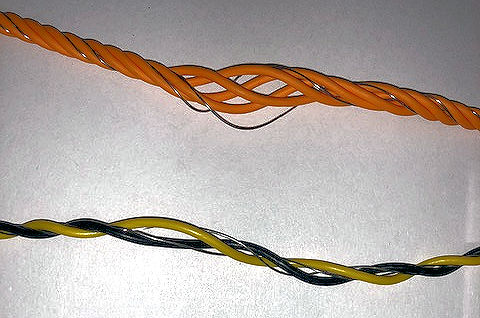 “so what is different with CMR Electrical cables” Whilst it’s flattering that the Chinese cables looks very similar, and in some examples the same as those manufactured by CMR electrical, it is worrying that cheap inferior detection cables that looks similar  and in some cases the same as ours, are being used by some our competitors. To answer the question, the main difference with our cable is that all the wires are welded together to form one solid cable. Because of this, the sensor wires are held in place stopping them touching each other and water is unable to penetrate its structure. Being a solid mass, the cable is less susceptible to damage and can be handled cleaned or wiped down without fear of damage. The following picture shows the same twisting test as above, but you will notice that none of the wires have separated and none of the sensor wires has spring out from the side of the cable.

CMR Electrical have been manufacturing both types of water detection cable since 2003 on equipment purchased from a water detection company who closed down in that year. The cable and the machine to make it, was designed by our technical director who was a senior partner of that company. Welding the cable to form a solid mass is the most difficult and expensive part of the manufacturing process.  Anyone can spin a few cables together using a drill if you want rubbish, but to have a consistently formed and welded quality cable requires sophisticated equipment and experience in the manufacturing of the product.

Click here if you would like to see more information on our water leak detection systems or perhaps you’d like to see our full product range  or would prefer someone to call you so you can discuss your requirements.