Water can be detected using a number of methods such as ultrasonic transducers, optical sensors and water flow monitoring. Most of the systems on the market today are based on the conductivity principle, where an electrical signal is passed through the leaking water thereby completing a circuit. Whilst there is nothing wrong with this type of detection method, care should be taken to ensure that you are choosing a system that will work when its needed. The conductivity method works by having two metallic sensors place side by side with a gap between them. When water touches both sensors an electrical signal passes from one through the water to the other, where it is used to setup an alarm. Simple, so what can go wrong….?, well think back to your school day physics lessons, if you put two electrodes in water and use a DC current, one of the electrodes gets eaten away and disappears, this is due to something called electrolysis. Electrolysis is the movement of ions through water, ions leave the positive sensor (anode) and are attracted to the negative sensor (cathode), where they are deposited as atoms. The negative sensor increases in size, while the positive sensor dwindles away. The impurities left behind, form a sludge beneath the positive sensor. 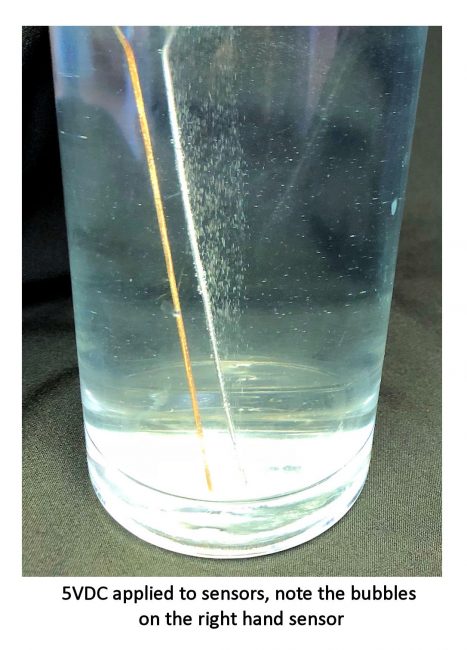 To overcome the effect of electrolysis, an alternating signal (AC) should be used. AC will stop the sensors form being eaten away because the polarity in both sensors is constantly being reversed, the result of this being that ions move form one sensor to the other in one half of a cycle, then back again in the other half cycle and so on. Another problem using the conductivity method is when trying to detect condensate water, de-ionised water, or distilled water. Water in its pure form is non-conductive and only becomes conductive when ions are dissolved in it. However, it should be noted that water is good at absorbing ions so providing the water touched a surface such as the floor or drip tray detection using the conductive method can be used providing the signal is sensitive enough to use the limited number of ions in the water.  For this reason, it is important to ensure that the detection signal has a sensitivity adjustment. To overcome the effects of electrolysis all of CMR Electrical water leak detection alarm systems use an A/C signal to detect leaking water. Also, as standard on all systems we provide individual sensitivity adjustment to allow a leak to be detected through water with a reduced ion count.

Another method of detecting liquids is by using optical sensors. CMR Electrical have a range of optical leak sensors that operated by using light refraction rather than metallic sensors. This type of sensor can be used to detect liquids that don’t contain any ions such as diesel oil, transformer oil or any oil based liquid, for more information see our Fuel and Oil Leak Detection page.

If you would like more information about our product range please visit our website at CMR Electrical.com, phone us on 01825733600 or fill in the Get in Touch form so we can contact you.